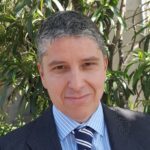 Manuel Crespo de la Mata. Graduate at Law at Madrid Complutense University. During the first 10 years of his professional career, he developed a legal practice in a law firm and a telco company. In 2005, he joined the Telefonica Group, where he has been in charge of different legal responsibilities. He was the General Counsel of the Group in the Latin America region, until he was appointed, in February 2016, Chief Compliance Officer of the Telefonica Group, leading an autonomous unit with direct report to the Board of Directors, through its Audit and Control Committee.