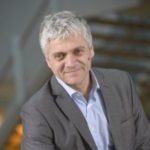 He is taking the role of Chief Technology Officer of ASSYSTEM Group starting from September2017.
He was appointed as a full professor at Toulouse University and Institut Universitaire de France in 2000 where he brought significant contributions to Internet of Things Technologies. From 2004 to 2013, he has occupied numerous top management positions at CNRS, National research agency and Ministry of higher education and research. He joined Alstom group in January 2013 as a R&D director in charge of coordinating the R&D and innovations activities across Alstom group and stimulating open innovation with Universities, Research organizations and Start-ups. He has also contributed to the creation of numerous public-private joint laboratories and incubators in the field of Power Electronics, Smart Grid, Smart City and Digital Energy and Transport. In Alstom he has initiated the Industrial Internet roadmap. From November 2015 until August 2017, he has been with General Electric as CTO and Ecosystem Director at the GE Digital Foundry in Paris.